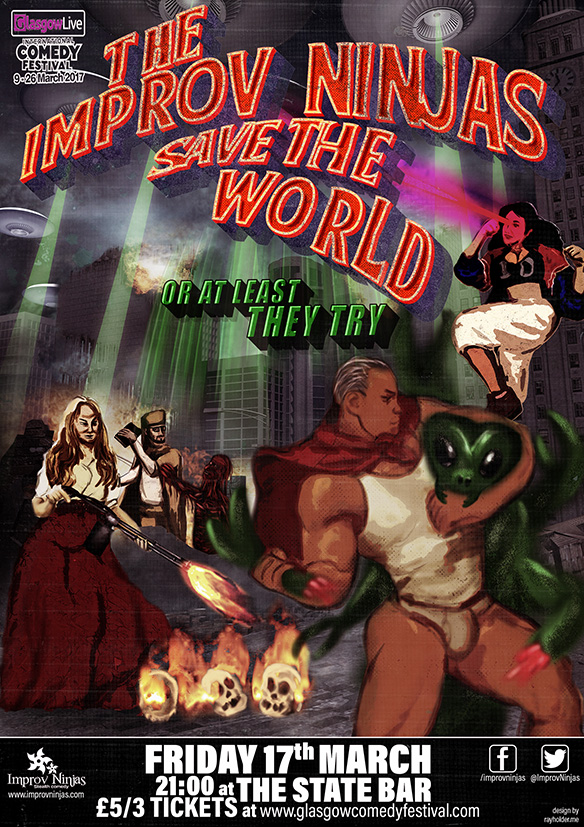 A quick turnaround need on this project.

I was contacted on Thursday by my graphic design tutor to see if I was able to help out a local comedy group ‘The Improv Ninjas’. They had been working with a designer/artist to create a flyer for the upcoming Glasgow Comedy Festival,  but disaster struck when the computer died. All they had left was some screen shot of the concept layouts.

Could I help out and pick up where it had failed, oh yeah it’s needed ASAP!

I’m never one to say no to an opportunity and tight deadlines are my caffeine. So I set to work.

The brief was to create a poster/flyer in a 50’s B movie style where each of the actors are fighting some sort of evil. The original artist had based one person as a orthodox priest beating evil with his Bible, one as Vinalla Ice,  one as a hippy chick with a flamethrower and a muscular superhero in his undies. Title ‘Improv Ninjas save the world’ tagline ‘or at least they try’

So my first task was to recreate the illustrations of the group,  taking the original artwork as a guide I built each character up layer by layer in Photoshop this took me around 3-4 hours,  not my best illustrations but considering the time constraints and the fact that these are going to be  reduced to A5 so no need for fine details.

Next was to tackle the background scene,  I felt that spending time illustrating this would take too long to get the results I would be happy with,  so I looked at alternatives,  this is where my recent 3D experience came in,  using 3D renders would be able to give that 50’s city scape look and also flying saucers would look fantastic.

Back to photoshop to put the elements together, applying textures to give it the letterpress effect and a bit of colour grading. All that was left was the text,  creating this in Illustrator, making it look 3D and handmade.  Placing this in the photoshop document.

My first proof was sent to the client one day after receiving the full brief, they were very happy but just had a few minor adjustments and the omissions of a logo from the brief that needed  to added.

Adjustments made, all completed  within 2 days. A very quick turnaround but a really interesting and enjoyable brief.